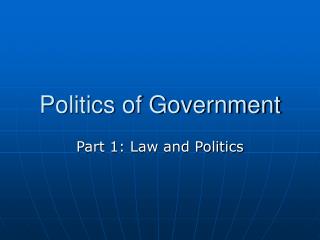 Politics of Government. Part 1: Law and Politics. What is the Authority of Law?. U.S. Constitution: Supreme Law of Land Congress Passes laws codified as statutes Delegates authority to Federal Agencies to Implement law. Serve a particular interest or constituency.

Government 9 Week Studyguide - . this is only a guide. review the power points online and the answers for the study guide