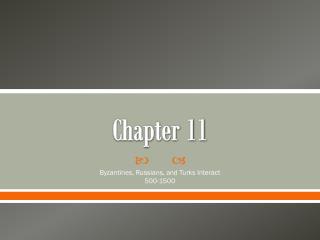 Chapter 11. Byzantines, Russians, and Turks Interact 500-1500. Section 1 – The Byzantine Empire. The New Rome. Empire was divided in 395 In 527, Justinian took over the East South to make the West great again Took Rome back from the Germanic tribes (changed hands 6 times in 16 years)