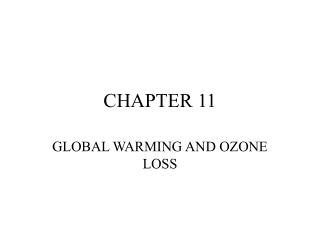 CHAPTER 11 GLOBAL WARMING AND OZONE LOSS The Two Greatest Threats 1. Global warming from fossil fuel burning and deforestation that enhances the earth’s natural greenhouse effect - it is the trophosphere (lower atmosphere) that is warmed