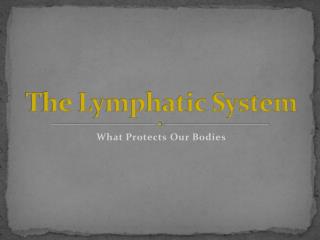 The Lymphatic System. What Protects Our Bodies. Imagine this…. ~ You are a knight in ancient medieval times. You are constantly on the look-out for enemy invaders. There! Suddenly, you spot one. You quickly inform the rest of your team as you go out to attack the enemy…

THE LYMPHATIC SYSTEM - . what exactly is this system?. which organs are involved? what is the function of the lymphatic

Lymphatic System: Functions - . returns interstitial fluid and leaked plasma proteins back to blood together with

The Lymphatic System - . by: seraphín and emma. what is it?. network of vessels that: - collect fluids lost by blood

Chapter 15: The Lymphatic System and Immunity - . the lymphatic system. system of tissues and vessels scattered

Lymphatic System - . lymphatic vessels – transport only in the direction toward the heart . pick up the “extra”