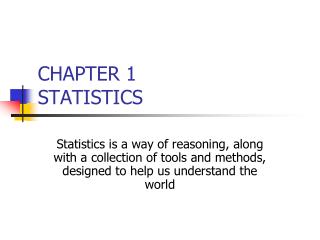 CHAPTER 1 STATISTICS. Statistics is a way of reasoning, along with a collection of tools and methods, designed to help us understand the world. READ THE BOOK. Think Show Tell For Example Step-by-Step What can go wrong* What have we learned?. CHAPTER 2 DATA.

Chapter 1 Powerpoint Review - . anatomy is the study of the structure and shape of the body and its parts. the study of

Chapter 1 ~ Statistics - . the joys of commuting. minutes. miles. chapter goals. create an initial image of the field of

Statistics Chapter 1 - . statistics, what is it? statistics is the science of collecting, organizing, visualizing,

House on Mango Presentation- ppt 1 - . what to do. vignettes. like a quilt. main character. coming of age. purpose for

Chapter 1-9: Statistics - . the bar graph shows the number of motor vehicles produced in the united states and europe