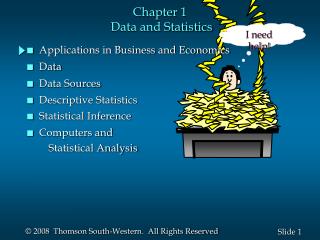 1 Chapter : Organizing and Displaying Data Introduction: Statistics : - Statistics is that area of study which is

Statistics Chapter 1 - . statistics, what is it? statistics is the science of collecting, organizing, visualizing,

CHAPTER 1 STATISTICS - . statistics is a way of reasoning, along with a collection of tools and methods, designed to help

Chapter 1 ~ Statistics - . the joys of commuting. minutes. miles. chapter goals. create an initial image of the field of

Chapter 1-9: Statistics - . the bar graph shows the number of motor vehicles produced in the united states and europe

Statistics Chapter 2 Organizing Data - . quick talk. think of a situation where you need to organize data? (any kind of

Chapter 1:Statistics: The Art and Science of Learning from Data - . 1.1: how can you investigate using data? 1.2: we