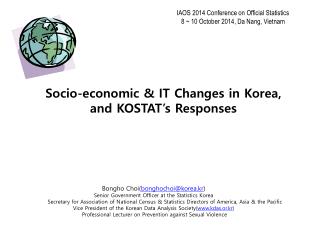 Socio-economic & IT Changes in Korea, and KOSTAT’s Responses Socio-economic & IT Changes in Korea, and KOSTAT’s Responses

January - June 2009 - . biannual economic and capacity survey. firm distribution based on annual turnover based on

What about la Francophonie? - . dr. will thompson the university of memphis tflta 2008. what is the present