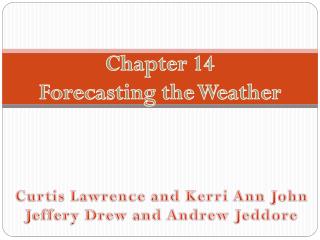 Chapter 14 Forecasting t he Weather. Curtis Lawrence and Kerri Ann John Jeffery Drew and Andrew Jeddore. Bernoulli principle. There is a relationship between air speed and its related pressure. It states: As the air speed increases the pressure will decrease.

Chapter 14 - Reconstructing Past Climates - . in order to understand the present and future climates on earth and other

Forecasting - . chapter 9. chapter objectives. be able to: discuss the importance of forecasting and identify the most