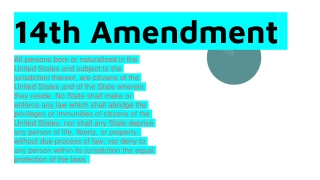 Equal Protection Clause: One of the rights of the 14th Amendment - The equal protection clause deals with the fact that

A little more on Selective Incorporation as developed through the 14th Amendment - . selective incorporation. creators of

Wednesday, December 14th - . please get your composition book and get to work on the handout. agenda critical lens

Wednesday, September 14th - . read article. underline at least 3 words whose definition is unclear to you…. after

Wednesday, August 14th - . write an equation: 4 less than a number is 10 2. define the variables, constant, and

First Amendment - . are you an absolutist or a relativist?. nat hentoff: absolutist. northeastern graduate wrote liner