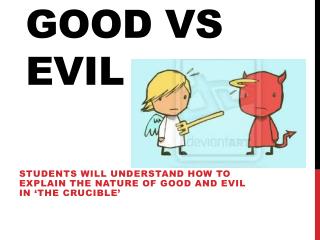 Good vs Evil. Students will understand how to explain the nature of good and evil in ‘The Crucible’. Definitions. Evidence. ANN PUTNAM : I take it on my soul, but who else may surely tell us what person murdered my babies ? PARRIS , horrified: Woman !