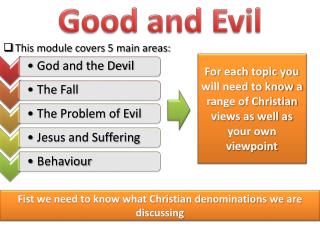 Good and Evil. For each topic you will need to know a range of Christian views as well as your own viewpoint. This module covers 5 main areas:. Fist we need to know what Christian denominations we are discussing . The Christian Denominations. GMOs: Good or Evil? - . the argumentative writing process. pre-writing - raft. r ole – who are you as the writer? a