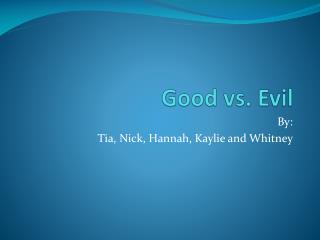 Good vs. Evil. By: Tia, Nick, Hannah, Kaylie and Whitney. Theme. If evil isn’t recognized, then good cannot be appreciated. . ACT I . “I return those duties back as are right fit, Obey you, love you, and most honor you. Why have my sisters husbands, if they say they love you all?”