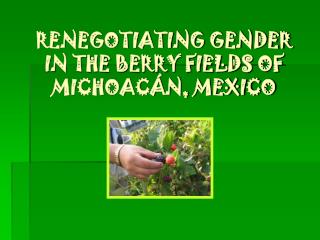 RENEGOTIATING GENDER IN THE BERRY FIELDS OF MICHOACÁN, MEXICO RENEGOTIATING GENDER IN THE BERRY FIELDS OF MICHOACÁN, MEXICO . The Transition From a Male-Dominated Agricultural Domain to a Female-Intensive Waged Labor force. Los Angeles, Michoac án, Mexico. Sugar Mill Closed 2002. Transition From Cane to Blackberries. In the Shadow of the Sugar Mill.

RENEGOTIATING GENDER IN THE BERRY FIELDS OF MICHOACÁN, MEXICO

Gender Statistics: What is all about? - . angela me unece statistics division. gender/sex. gender refers to socially