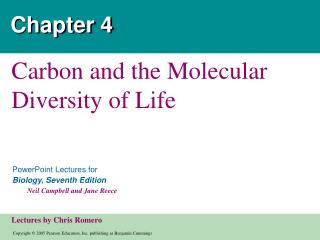 Chapter 4. Carbon and the Molecular Diversity of Life. Figure 4.1. Overview: Carbon—The Backbone of Biological Molecules All living organisms Are made up of chemicals based mostly on the element carbon. Concept 4.1: Organic chemistry is the study of carbon compounds Organic compounds