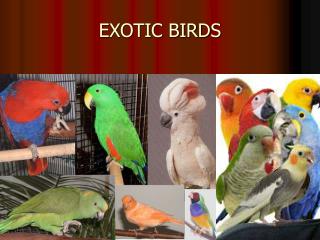 EXOTIC BIRDS. Type of pet birds. The Class Aves consist of more than 8,500 species of birds and 29 orders of birds Two orders commonly kept as pets in the United States are Psittaciformes (parrots) and Passeriformes (canaries and finches). Types of pet birds.

The Bird Body - . characteristics of birds. all birds are members of the class aves birds have retained some reptilian

Birds - . ornithology is the study of birds. in a clade with dinosaurs!!. taxonomy kingdom animalia phylum chordata

Adaptations and Behaviors - . by: salina elitawi. birds adaptations. birds wings allow them to fly for migration.

SECTION 3 - . birds. characteristics of birds. all birds are covered in feathers and lay hard shelled eggs. they sit on

Penguins and Birds are very different. - Birds. penguins. penguins have heavy bones are a type of birds birds have light

Survey of Birds and the Feeding Observations - . by: rachel jacobs and laura yost. hypothesis/purpose. birds have food

Groups of Birds - . bird groups. bird species are often categorized into six groups based on the bird’s lifestyle