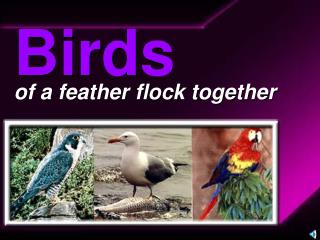 Birds. of a feather flock together. Haliaeetus leucocephalus (Bald eagle). Introduction of birds with some important features. Common symptoms between eagle and falcon. General bird themes. Birds of prey.

Birds - . feathers – if it has feathers, it’s a bird feathers are really just modified scales birds are also known