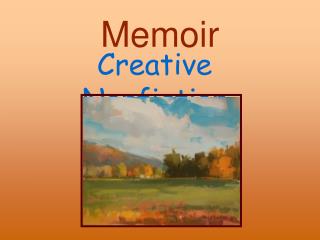 Memoir. Creative Nonfiction. What is Memoir? In general, Memoir is a highly detailed sensory account of an event which, though personally significant, is of universal import, since it conveys a central point or lesson that the writer wishes to share. Genre: Memoir - . definitions for memoir. a record of important events based on the writer’s personal observation or

Memoir Writing - The times of your life. memoir writing. memoir comes from the latin word &quot;memoria&quot;