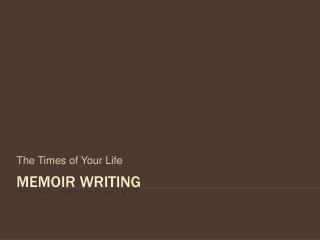 The Times of Your Life. Memoir Writing. Memoir comes from the Latin word "memoria" meaning memory. A biography or autobiography is a person’s life…a memoir is a “slice” of life. What is a Memoir. R. O. C. K. E. T. B. O. Y. S. Movie is based on Hickmans’ memoir called Rocket Boys. MEMOIR WRITING - Have you decided upon: * a life event for your memoir? * a problem or conflict to relate to the

Memoir Writing - . honors 9 th lit spring 2014. first 10. create a “quick list of memories that you may want to write

Writing Memoir Leads - . grabbing the reader’s attention with an interesting opening. where to

Writing A Memoir - . a focus on writing style, structure and organization. what is a memoir?. what is a

Memoir Writing Project - . by stacy upton. memoir directions. write a true story about an event in your life

Memoir Writing Workshop - . by t. jasmine. what is a memoir?. a memoir…. autobiographical writing captures certain