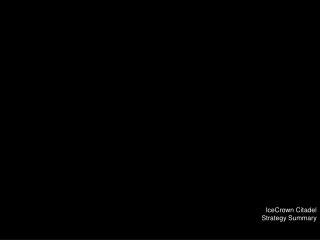 IceCrown Citadel Strategy Summary. Intro. This is intended as a primer, a basic summary of what you should be aware of for EACH boss. This is not definitive and classes should take note and discuss specific issues in the class forums.

Chapter 16 EC Strategy and Implementation - . learning objectives. describe the importance and essentials of business and

STRATEGY FOR ACCOUNT MANAGERS - . developing and honing your strategic skills. presented for the 4a ’ s, 11/17/11, by

Strategy - . is it a plan, a plot, a learning curve ? no – its strategy !. the organization in its environment.

Chapter 12 The Strategy of International Business - . introduction . what actions can managers take to compete more

‘Strategy and the Internet’ vs. ‘Rethinking Strategy in a Networked World’ - . articles by michael e. porter and