Ukraine on the way to independence. First years of the independence (1986-1994). - PowerPoint PPT Presentation 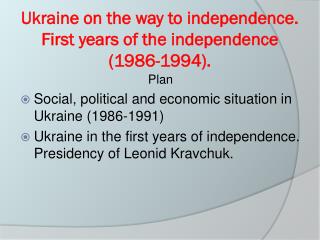 Chapter 11: Analyzing the Association Between Categorical Variables - . section 11.1: what is independence and what is

Ukraine - . on the 24 th of august, 1991, ukraine proclaimed its independence. nowadays ukraine is a sovereign,

Promoting Independence for Adults with Autism: Employment and Beyond - . peter f. gerhardt, ed.d. organization for autism

Taking Control of Your Scientific Career: Building Towards Independence and Beyond… - Biotechnology pharmaceutical