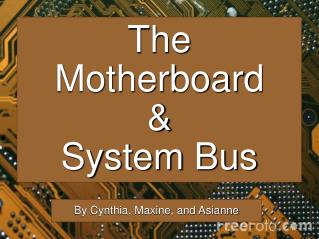 The Motherboard & System Bus. By Cynthia, Maxine, and Asianne. The Motherboard. The main circuit board of the computer. Also known as main board, system board, base board, planar board, logic board, and mobo. Contains the memory, mass storage, The Nervous System - . anatomy &amp; physiology. the basics. the nervous system is your body's decision and