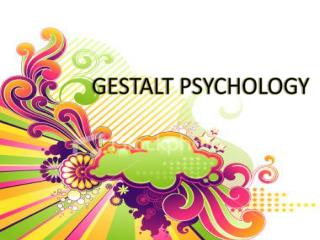 Gestalt Therapy - . questions?. what key concepts do you know in terms of gestalt therapy?. view of human nature: people

Gestalt Therapy - . what are you doing? what do you feel? what do you want?. psychopathology. people have problems

Gestalt Principles - . gurpreet. what are the gestalt