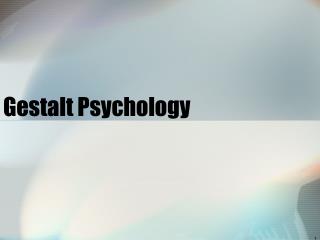 Gestalt Psychology. Psychology 1910 - 1920. 3 “schools” of psychology opposing Wundt’s psychology and Titchner’s structuralism Functionalism – objected to the narrowness or structuralism and reductionism Behaviorism – rejected study of consciousness for the study of observable behavior

Gestalt Therapy - . questions?. what key concepts do you know in terms of gestalt therapy?. view of human nature: people

Gestalt Therapy - . what are you doing? what do you feel? what do you want?. psychopathology. people have problems

Gestalt Principles - . gurpreet. what are the gestalt