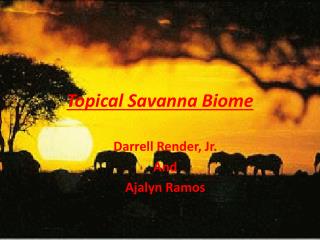 Topical Savanna Biome. Darrell Render, Jr. And Ajalyn Ramos. Location of Biome. African Savanna biome is a tropical grassland that takes up almost half of Africa. Climate. Very long dry season-Winter Very wet season-Summer From May-November, it gets 15-25 inches of rain per month Savanna Biome - . tropical grassland with some clumps of trees . trees can be palm, pine, and acacia animals include

The environmental factors delimiting the savanna biome are complex: - Introduction to south african landscape systems at

Savanna - . today i will learn about the savanna because i need to know the characteristics that scientists use to

Savanna - . by rachel . savanna. savannas are compress mostly of grasses and few scattered red trees. they can result

Savanna - . nicolette, elizabeth, and bobby . where in the world is it? . venezuela brazilian highlands central africa

Savanna - . by: noah frantz. location. can be found between desert and tropical rainforest biomes. located in wide bands

Savanna - . ben &amp; abby. a savanna is a grassland in africa. many plants and animals live in the savanna. there

Savanna - . by: taylor giles jaskiran saini eva stebel. what is a savanna?. a savanna is a grassland region with

Savanna - . b y: mikey trapp . it has lots of grass, lots of animals, and some trees. the climate is the temperature in