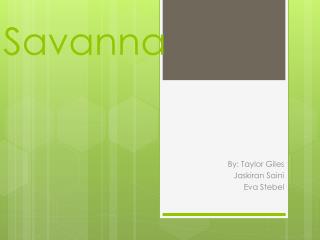 Savanna. By: Taylor Giles Jaskiran Saini Eva Stebel. What is a Savanna?. A Savanna is a grassland region with scattered trees, grading into either open plain or woodland. It is usually located in subtropical or tropical regions. Latitude(Brazil): 3 S 25 S. Savanna - . today i will learn about the savanna because i need to know the characteristics that scientists use to

Savanna - . by rachel . savanna. savannas are compress mostly of grasses and few scattered red trees. they can result

Savanna - . nicolette, elizabeth, and bobby . where in the world is it? . venezuela brazilian highlands central africa

Savanna - . by: noah frantz. location. can be found between desert and tropical rainforest biomes. located in wide bands

Savanna - . ben &amp; abby. a savanna is a grassland in africa. many plants and animals live in the savanna. there

Savanna - . b y: mikey trapp . it has lots of grass, lots of animals, and some trees. the climate is the temperature in

Savanna - Lauren, andy and porter. savanna. this is an example of the land in the savanna. includes: tundra taiga desert

Savanna - . regions of africa. savanna. a savanna is a rolling grassland scattered with shrubs and isolated trees not

The Savanna - By el bi. the savanna. africa, australia, india and south america is where the savanna biomes are located.