Why Not Use Solar Power?? - PowerPoint PPT Presentation 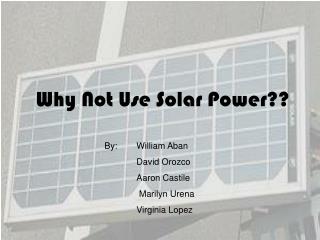 Why Not Use Solar Power?? Why Not Use Solar Power??. By: William Aban David Orozco Aaron Castile Marilyn Urena Virginia Lopez. About Solar Power. A power company would benefit for using solar power by the follow: .

Why Not Use Solar Power??

Questions - . how do we form hypotheses about the formation of our solar system? in what ways can we scientifically test Good Reasons To Power Your Home With Solar Energy - Be it a small residence or any commercial building, reducing bills by