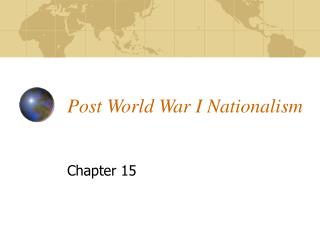 Post World War I Nationalism. Chapter 15. Mexican Revolution. Porfirio Diaz ruled Mexico as a dictator for 35 years Welcoming foreign investors, Mexico appeared to be growing in peace and economy, however only an elite few benefitied Most people lived in poverty working on haciendas

Property/Casualty Insurance in a Post-Katrina World An Industry at the Crossroads - . insurance information institute may

What Are We Learning Today? - . 2.4 explore the relationship between nationalism and the pursuit of national interest.