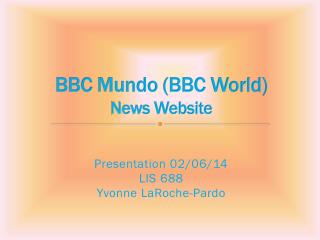 BBC Mundo (BBC World) News Website. Presentation 02/06/14 LIS 688 Yvonne LaRoche-Pardo. ● This is one of 33 foreign language outputs provided by BBC World Service. It is an offshoot of BBC World. ● It is written in Spanish for Latin Americans. BBC - . by: kait anderson. what as the bbc?. the bbc is the   british broadcasting company the bbc was a radio station.

BBC - . our visit to the bbc studios. nina and alina live.

BBC ONE - . david hildick-smith sussex cardiac centre brighton, uk on behalf of the bbc one investigators. bbc one. the b