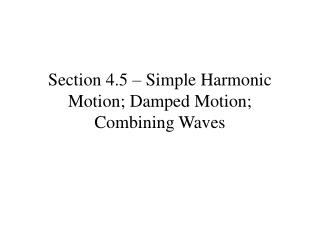 Section 4.5 – Simple Harmonic Motion; Damped Motion; Combining Waves. Equilibrium is the location where the object is at rest. A. C. B equilibrium. The amplitude of vibration is the distance from the equilibrium position to its point of greatest displacement ( A or C ). AP Multiple Choice 2004 answers - . 1. 72% for which of the following motions of an object must the acceleration always