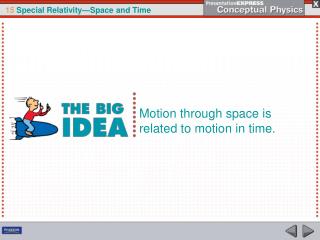 MOTION IN SPACE - . kepler’s laws. in 1543 copernicus published on the revolutions of the heavenly spheres in which he

Time and Motion in Photography - . how to freeze and blur movement. shutter speed. controls the length of time the

Motion through the universe - . rotation. results in day/night. 24 hour period (measured by earth’s equator. center of

What is motion? - . chapter 15, lesson 1. motion. it is a change of position. when you change your position you move.

What is motion? - . an object is in motion if it changes position over time compared to a reference point. what is

What is Motion - . chapter 9. key skills. design and conduct an experiment to test a hypothesis about falling objects

What is Motion? - . chapter 9 section 1 and 3. recognizing motion. reference point : a place or object used for

What is motion? - . motion notes. motion happens when an object changes its position . reference points are used to