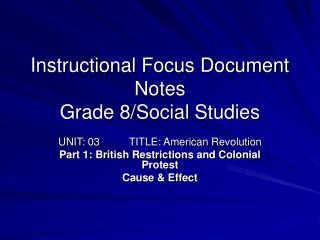 Grade 8 Social Studies Discord Unit - Navigating your electronic textbook. consider this a textbook, not a powerpoint

Welcome to 8 th Grade Social Studies! - Hello. feel free to look through your agenda (the grayish colored binder) and all

Grade 8 Social Studies Instruction - . overview of content use of tci the world before transatlantic travel use of

Grade 8 Social Studies Review - . chapter one: history and the historian chapter 2: the people who lived here. this is

8 th Grade PowerPoint - . by, your name. directions. slide #2: title google docs give some bullet points on using this