The Jazz Age (of The Roaring 20s) - PowerPoint PPT Presentation 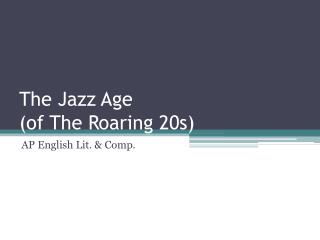 The Jazz Age (of The Roaring 20s). AP English Lit. & Comp. Roaring 20s (Jazz Age). The "Roaring Twenties," or Jazz Age, ushered in an exciting era of prosperity after World War I. It was a time of extremes in America. Many Americans enjoyed greater opportunities for material wealth.

BROUGHT TO BY JAZZ MY WHEELS: - . how to detail your car. tools of the trade. vacuum cleaner variety of rags various

The Roaring ’20s and the Great Depression - . chapter 20-23. ssushs. ssush16 the student will identify key developments

Improvising Complexity: The Philosophy of Jazz - . the nature of improvisation in jazz music. the nature &amp;

1920s - . the jazz age. the 1920 census showed that for the first time in american history more people lived in urban