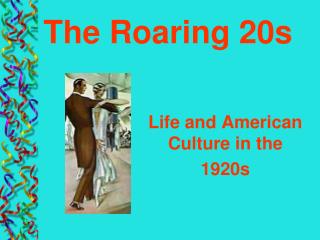 Life and American Culture in the 1920s. The Roaring 20s. A. The Roaring 20s. Best word to describe the 1920s Euphoria is generally considered to be an exaggerated state Not based in reality or anything tangible Feeling that things are great and only going to get better

The Roaring Twenties - . factors underlying the prosperity of the 1920’s. introduction. at the end of the 1918, world

THE ROARING TWENTIES - Life &amp; culture in america in the 1920’s. the roaring twenties. changing ways of life.

The Roaring 20s - . speakeasies. flappers. flappers. women gain right to vote in canada in 1918 remain in workforce after

The Roaring Twenties! - . why were people happy?. soldiers back from war new roles for women new technologies!. new

ROARING 20s - . why were people happy?. soldiers back from war new roles for women new technologies!. soldiers wait to

The roaring twenties - . if you were an actor…. you would make $ 7,800 annually. you would typically live within

The Jazz Age The Roaring 20s The Flapper Era The Harlem Renaissance The Lost Generation - . what does each tell you about

The Roaring Twenties - . get started! 10/29. you need the three items from the front table. complete the question on your