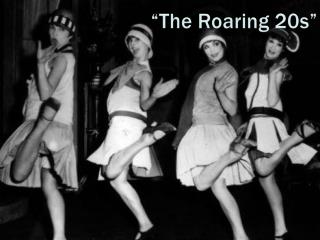 “The Roaring 20s”. New Ideas. After WWI, America would become the world’s leading economic power. But the 1920s would be a time of great change in America. People began to question long-held beliefs about the world. New Ideas. Expert Learning Centers - . the roaring ’20’s. presentation day. please get into your teams from yesterday. take out

The Roaring 20’s - . an era of prosperity, republican power, and conflict. as the war ended. spanish influenza

The World Between the Wars: Revolutions, Depression, and Authoritarian Responses - . roaring 20s/ bouncing

From Prosperity to Crisis - . 1920-1939 roaring 20s great depression new deal. isolationism refusing to get involved in

POLITICS OF THE ROARING TWENTIES - . chapter 20. americans struggle with postwar issues. section 1. how did world war i

Weimar Germany and the Roaring Twenties - . overview. versailles and the end of world war i weimar republic economic and

The Roaring Twenties - . focus: how does communism differ from american capitalism and democracy. i. red scare and