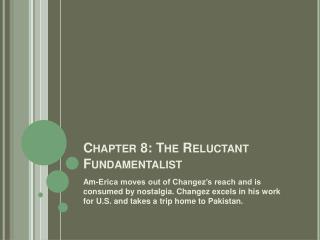 Chapter 8: The Reluctant Fundamentalist. Am-Erica moves out of Changez’s reach and is consumed by nostalgia. Changez excels in his work for U.S. and takes a trip home to Pakistan. Chapter 8: Erica. Why I am an Atheist and Freethinker - . by ed hensley presented at christian academy of louisville november 10, 2008.