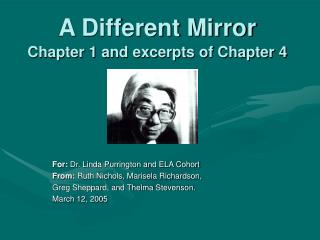 A Different Mirror Chapter 1 and excerpts of Chapter 4

A Different Mirror Chapter 1 and excerpts of Chapter 4. For: Dr. Linda Purrington and ELA Cohort From: Ruth Nichols, Marisela Richardson, Greg Sheppard, and Thelma Stevenson. March 12, 2005. What is an American?.

A Different Mirror Chapter 1 and excerpts of Chapter 4

Chapter 1- 4 - . review of main ideas. directions. take cornell notes over powerpoint and videos contained in this

Chapter 1 Powerpoint Review - . anatomy is the study of the structure and shape of the body and its parts. the study of

Chapter 4-1 - . preparing a chart of accounts. 5-1. journal provides a permanent record of debit and credit parts of a

Chapter 1-4 - . review. chapter 1. 1. how is communication defined? the social process by which people in a specific

Chapter 4-1 - . water. properties of water. all cells contain water. about two thirds of the molecules in our body are

Chapter 4-1 - . this means producing just enough to meet the families’ needs, with little left over to sell or

Chapter 4 Powerpoint : Hearing - . warm up. how do we hear?. audition. audition the sense of hearing