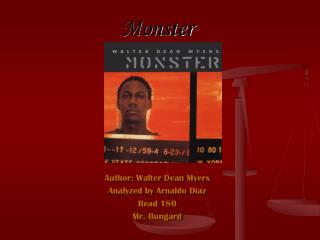 Monster. Author: Walter Dean Myers Analyzed by Arnaldo Diaz Read 180 Mr. Bungard. Definition: It was in July and it takes place in the jail and the court. MONSTER - Walter dean myers. monster. background notes. the name of the protagonist, or main character , in our novel is

Monster - . pages 206-281. affirmative. positive or in agreement. surly. hostile or unfriendly . taint. to spoil or

Monster - . pages 127-205. montage. in a film, pictures that are laid over one another in a rapid sequence. traversed.

Monster - . assignment 19: quiz pages 1-113. directions. in groups of four, use a piece of constructions paper to write

Monster - . desmond martin. steve . steve is a kid being convicted of murder. he is 16 yrs old and he is thin and brown

Monster Chip like Monster Home? - . “…what san franciscans have come to know as a monster home--a 6,000-square-foot