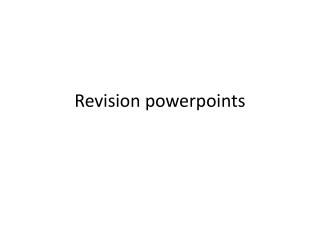 Revision powerpoints. Primary Sources. A primary source is a document or physical object which was written or created during the time under study. Examples Include : diaries, speeches, manuscripts, letters, interviews, news film footage, autobiographies, official records and artefacts.  . Being active in your revision using Powerpoints - . revising, adding materials testing yourself. why be active in

PowerPoints - . the good, the bad, and the ugly. how to avoid boring us all to death. boring, generic title that is

SDB Powerpoints - . is proud to present in conjunction with the department of homeland security, and the transportation

Arctic PowerPoints - . by room 17. it is an inuksuk quviasuictag. it means joyful or i’ve been here. you might find

SDB Powerpoints - . present. safety at railroad crossings. this presentation is to show you some statistics on railroad

RADICAL POWERPOINTS: - . this is totally one of them. written &amp; presented by joe st. germain. oh, shit!. did you