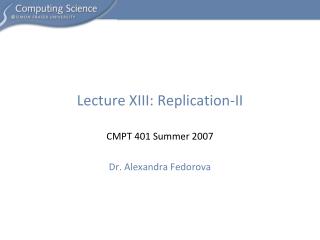 Bellringer - . what question do you ask yourself to identify the test variable? outcome variable ?. bellringer.

WHAT IS THE Isis 2 LIBRARY? - . cornell university. ken birman. isis 2 is a technology for replication. solves the

Chromosomes and DNA Replication - . section 12–2 this section describes how dna is packaged to form chromosomes. it