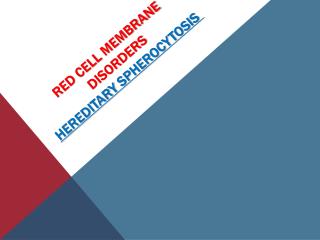 Red cell membrane - Objectives. after studying this lecture you should be able to: 1-list the main functions of the red

Red cell disorders - . disorders of red cells can result in anemia or, less commonly, polycythemia (an increase in red

Cell Membrane - . learning objectives. outline the roles of membranes within cells and at the surface of cells state that