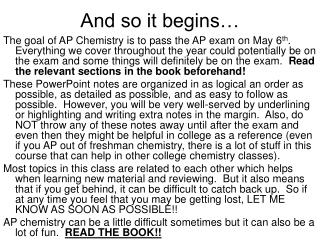 And so it begins…. The goal of AP Chemistry is to pass the AP exam on May 6 th . Everything we cover throughout the year could potentially be on the exam and some things will definitely be on the exam. Read the relevant sections in the book beforehand! Chapter 16 - . using effective promotional techniques cps questions. 1. which of the following does a promotional

WELCOME! Please complete the “Reflection on Concerns and Vision” Questionnaire Before the session begins. Thank

It All Begins At the Top How to Lead Your District In the Use of Technology and 21 st Century Skills - . john doherty,

World War II - . the war begins. nazi-soviet pact. “there exists no real conflict of interest between germany and

European Exploration - . what did europe want?. spread christianity gain territory get rich. a map of the known world,

The Cardiovascular System: The Heart - . embryology of the heart. derived from mesoderm, begins development at 3 rd week