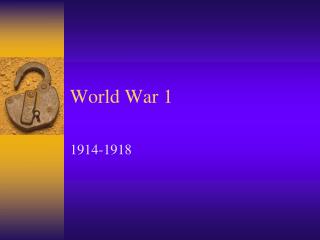 World War 1. 1914-1918. The US before WW1. REMEMBER! Industrialization The US begins to increase industry during rebuilding from the Civil War (Reconstruction) Immigration Foreigners begin entering the US for work, religious freedom, etc. Progressive Era World War 1 - . tension in the balkans. imperialism. why would britain feel threatened by the rise of a german empire?.

World war 1 - . by isabella ratcliff. poppies. poppies are a kind of flower,they are red and delicate flower. they help

WORLD WAR 1 - . by eoin b and calum. this is the solders going over the top. random facts. world war 1 began on july 28,

World War 1 - . causes of the first world war. several factors led to the war : 1. france and germany butted heads over

World War 1 - . 1914-1918. why did congress reject the league of nations?. background information european allies were

World War 1 - . the war to end all wars!!. the spark. the assassin . causes . imperialism- colonization was nearly done