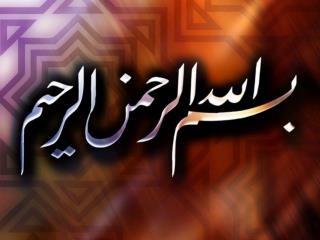 Bismillah. Whenever a Muslim begins anything he begins in the name of Allah. In the Name of Allah, The Most Merciful The Beneficent,. ISLAM. Islam. Islam. Islam is not a new religion. . It is the message that all the prophets taught. The Message. God is one and worship only God Almighty.

Bismillah - . divine will and it’s reflections to our life. god (allah) revealed messengers day of the judgment

Virtues of Bismillah - . source. courtesy: www.everymuslim.com. click for next slide. incidents relating to bismillah. an

Bismillah - . bismillah (in the name of allah). is the beginning of all good things. inviting with appearance (look) very

Bismillah Airahman Iraheem Discuss the concept of End Times within the Qur an, Hadith and Revelations in the Bible - Why

The Words - . first, second and third word. the first word. bismillah (in the name of god). we are in the realm of

Etiquettes of eating and drinking: - . what to do:. what not to do:. eat and drink while sitting. saying bismillah before

Surah Al-Fatiha Vocabulary - . read the word. think of what the word means. try and think of the picture you drew to help