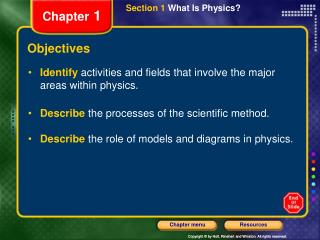 Section 1 What Is Physics?. Chapter 1. Objectives. Identify activities and fields that involve the major areas within physics. Describe the processes of the scientific method. Describe the role of models and diagrams in physics. What is Physics?.