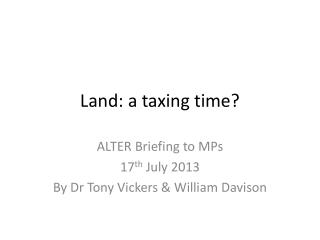 Land: a taxing time?. ALTER Briefing to MPs 17 th July 2013 By Dr Tony Vickers & William Davison. Aim of this Briefing. Explain What LVT is How Party policy has developed What others say about it Why ALTER is unhappy with outcome of Tax Policy Working Group