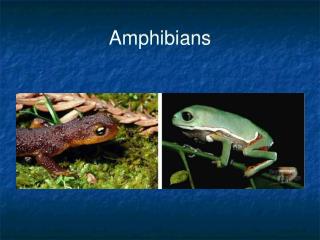 Evolution of Amphibians - . how do we define the amphibia?. amphibians. they have a 2-phase life history. there is

Early Development - . amphibians. cleavage in a frog. describe the progression of events. gastrulation in xenopus. what

Life cycle of animals - . by: ashley gilmer. what would you like to do???. mammals. quiz. amphibians. insects. !mammals!.

Amphibians of Belize - 18 april 2008. amphibians of belize. mostly occur in the north temperate regions only 1 family