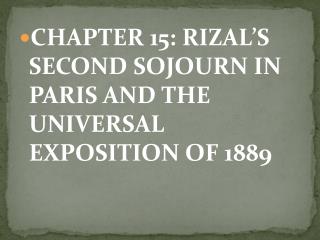 Best of Paris Fashion Week - Backstage and collection highlights from

The City in Space and Time - . the human mosaic chapter 10. introduction. imagine humankind’s sojourn on earth as a

Chapter 21 The Second Homecoming - . may 1892 there were certain reasons as to why jose rizal would again return to his

Chapter 15 - . managing communication. learning objectives after reading this chapter, you should be able to:. understand

Chapter 15 - . section 15.6 limits and continuity; equality of mixed partials. second derivatives for a function of

Chapter 15 - . darwin’s theory of evolution. “…the single most important scientific idea that anyone has ever

Chapter 15 - . an introduction to quality of life, human rights, and democratization. chapter focus. to what extent does