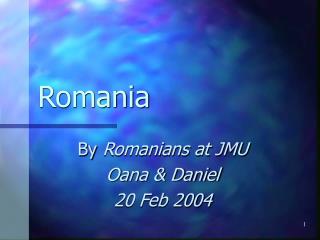 Romania. By Romanians at JMU Oana & Daniel 20 Feb 2004. Romania in Europe. Romania is a country in the Eastern part of Europe . Population 22.4 million National Currency : LEU

Romania - . by ethan stancliffe. romania has many great

ROMANIA - . location. romania is a country located in south-eastern central europe, on the lower danube, north of the