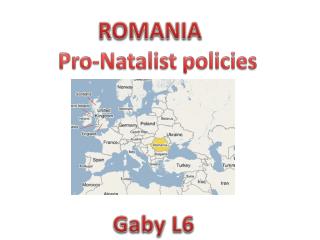 ROMANIA. Pro- Natalist policies. Gaby L6. background. Economic growth was very important so their political system made long term plans to make sure they could keep this on.

Romania - . by romanians at jmu oana &amp; daniel 20 feb 2004. romania in europe. romania is a country in the eastern