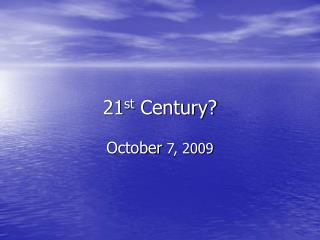 History and the 21st Century - . legacies of the 20 th century and the lost decade. announcements. course is open for

The 21 st Century Teacher - . “if we teach today as we taught yesterday we rob our children of tomorrow.” -john

21 st Century Skills? - Educational use of icts and media education in finland – towards the roadmap of the future

Education for the 21 st Century - . presented by jan stanley, assistant director office of assessment and accountability